Get fresh music recommendations delivered to your inbox every Friday.
We've updated our Terms of Use. You can review the changes here.

As The Dust Is Beginning To Settle

by The Nameless Book 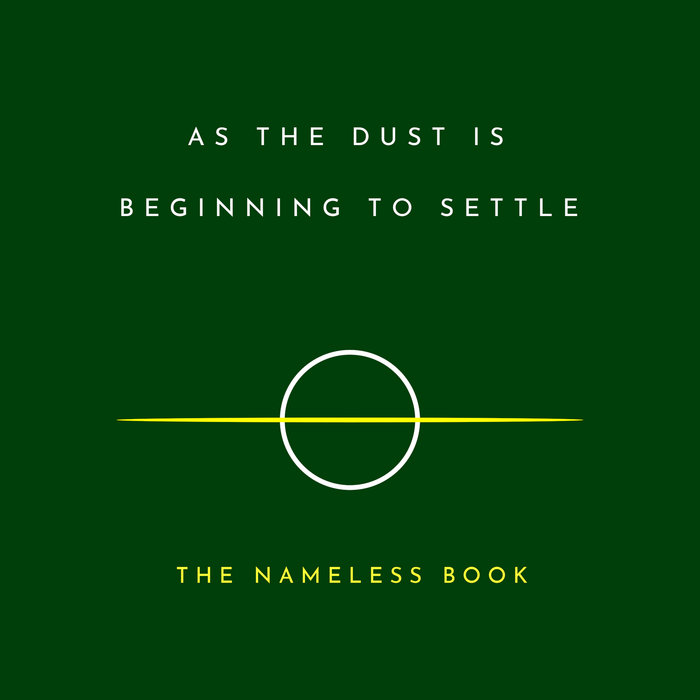 The Nameless Book managed to squirm their way onto the bill at Piney Gir's midsummer Daylight Music gig at the Union Chapel in June 2019, as the sonic grouting between the acts playing. Four pieces of summer ambience were prepared and improvised live, using some sound effects, a couple of synths and a shit-ton of reverb. Recordings of the event sounded good, but were compromised with the sounds of guitars tuning up and people buying cake, so the decision was made to re-record them in a studio.

The same pair of synths (and a lot of pedals) were assembled at Studio Klank in Wood Green and extensively prodded until suitable sounds were recreated. Extra parts were overdubbed to expand the original improvisations out to immersive proportions, though always using the same two synths and nothing else. After a large number of tweaks the mixes were finished in early October to form the first half-hour 'episode' of music directly ascribable to The Nameless Book.

The sound effects (taken from copyright-free BBC CDs) were put in place first so the synths react to them, rather than the usual method of being added after the musical content has been finished. This, and the way the tracks are mixed, create an unusual sense of the music being behind the atmosphere rather than the more common role for natural sounds as a backdrop for the music. The result is four tracks that are more interested in creating an ambience rather than directly engaging with your attention; aiming for the ambient ideal “as ignorable as it is interesting”.

Each track is named after the faint memory of a vaguely appropriate place, though in one case it's an imagined memory of a fictional place.

Thanks to all who've helped me with opinions, advice and encouragement, especially Kelly, Ben @ Daylight Music, Matt, Lewis, Gareth, Tom, Rigs, Olaf, Jerv, Andy and many others I've temporarily forgotten. Every drop was hugely appreciated.

Termally indecisive noise repository. Contraction enthusiast. Sofa dweller. Has contributed to many other projects and now wants to just do stuff without having to justify it.

Bandcamp Daily  your guide to the world of Bandcamp